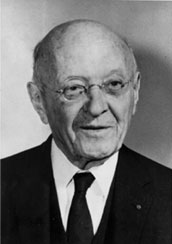 The papers of John Lord O'Brian, a distinguished lawyer and prominent public servant for whom the law school building is named, are housed in the Law Library Archives. Chronicling O'Brian's long and productive life from 1874 to 1973, the papers span the years of his legal career and public service activities. The papers include legal memoranda, opinion letters, personal notes, personal correspondence, published articles, photographs, honorary medals and other memorabilia. They are organized according to some of the major activities in which O'Brian was involved.

The collection includes the two volumes, Reminiscences of John Lord O'Brian, an oral history conducted in 1952 as part of the Columbia University Oral History Project. In addition, there are three reels of microfilm that reproduce the collection of O'Brian papers in the Hoover Institution at Stanford University.

For more information about the collection, consult the finding aid.

In February 1909, O'Brian was appointed by President Theodore Roosevelt to serve as U.S. Attorney for the Western District of New York. He continued to serve in this position through the administrations of President Taft and President Wilson.

In 1929, President Hoover appointed O'Brian to serve as Assistant Attorney General of the Anti-Trust Division at the U.S. Department of Justice where he was responsible for arguing more than 15 cases before the U.S. Supreme Court. He was retained by the Tennessee Valley Authority in 1935, eventually winning the case that challenged the creation of the Authority.

In 1941, President Franklin Roosevelt appointed O'Brian to serve as General Counsel of the War Production Board. From 1945 until his death, at age 98, O'Brian practiced law in Washington, D.C.

From 1907 through 1921, O'Brian was a volunteer instructor in Insurance Law. From 1931 and continuing for the next seventeen years, O'Brian served as member of the Board of Regents of the University of the State of New York.

O'Brian served the Law School in many capacities and was the principal speaker at the October 21, 1949 dedication of 77 West Eagle Street, a former home of the University at Buffalo School of Law. On May 6, 1963, O'Brian received the Law School's first Distinguished Alumnus Award for Public Service.

At the formal dedication of O'Brian Hall in April 1974, a portrait of O'Brian, painted by Virginia Cuthbert, was presented to the Law School by Manly Fleischmann, a SUNY trustee and Mrs. Kellogg Mann, the eldest daughter of O'Brian. This portrait currently hangs on the second floor of the Law School Library.

John Lord O'Brian's personal papers were donated to the Law School in 1974.

The scan below is of the University at Buffalo School of Law Register for 1896 which shows John Lord O'Brian's signature as the 20th student to register for the Class of 1898 when he was 21 years old. He gave his address as 55 Cleveland Avenue, Buffalo, his education as Harvard A.B., and his father as John O'Brian. The red ink in the last column shows he graduated on May 23rd, 1889.

Appointments are required to view this collection:

This is a closed collection for in-house use only.