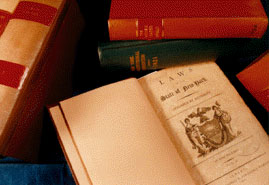 Morris L. Cohen, Law Librarian emeritus at the Yale Law School, began purchasing rare volumes for the collection in 1962, while he was the Law Librarian at the University at Buffalo. Among the first titles acquired was Henry de Bracton's De Legibus et Consuetudinibus Angliae, a 1569 edition of a legal treatise probably written between 1250 and 1258 which describes the practice of law in the English royal courts. The Collection continued to grow under the direction of Cohen's successors until the early 1970s.

Now containing over 1000 volumes, it is modest in comparison to the rare book collections at other major law schools. The collection is located in locked, glass-front wooden bookcases on the 3rd floor of the Law Library.

While modest in comparison to the rare book collections at other major law schools, it features a wide representation of early English treatises, generally regarded as the origins of the Anglo-American legal system. Two of the more important treatises included are Sir Edward Coke's Institutes of the Lawes of England (published in 1628-1644 in four parts) and Sir William Blackstone's Commentaries on the Laws of England (published 1765-1769 in four volumes).

The Morris L. Cohen Rare Book Collection is a unique resource in Western New York and offers research opportunities for a variety of scholars. Research needs ranging from legal history and jurisprudence to early English and American history, sociology, geography, political science, and etymology are met by the Cohen collection. Part of the collection is catalogued in the OCLC database, with the Charles B. Sears Law Library indicated as a holding library. The collection as it was in 1981 is included in the Checklist of Rare Materials in the Charles B. Sears Law Library which is available at the Library.

To see a list of our Rare Books, search the University Libraries catalog and filter to Law Rare Books.

Appointments are required to view this collection:

This is a closed collection for in-house use only.