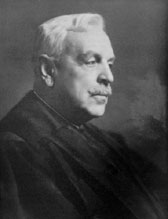 Mr. Sears was admitted to the New York bar in 1895 and practiced in Buffalo until 1917. In 1917, he began his long and distinguished judicial career when he was appointed as a justice of the Supreme Court of New York. He continued as a justice of the Supreme Court when elected for terms in 1918-31 and 1932-40. Mr. Sears was assigned to the Fourth Department of the Appellate Division for the 1922-26 term, reassigned for a term of five years in 1927-31 and was presiding justice from January 1, 1927 to January 1940. Appointed associate justice of the New York Court of Appeals in 1940, Mr. Sears retired on December 31, 1940 and served as official referee of the court. In 1947, he was the presiding judge for the Military Tribunal IV which considered "The Flick Case" in Nuremberg, Germany.

An additional photo and brief biography of Charles B. Sears is available in the Historical Society of the Courts of the State of New York Portrait Gallery.

Here is an additional biography reproduced with the permission of The Historical Society of the Courts of the State of New York. Any other use of this material is strictly prohibited.